Jack and Charmian London called their dream home "The Big House", but their friends nicknamed it the "Wolf House".

The Wolf House was designed by architect Albert Farr of San Francisco, with considerable input by Jack and Charmian London. Construction started in 1910 and it was nearly completed when it burned down in August 1913. Several years ago, a team of forensic experts studied the cause of the fire and concluded that the fire was started by spontaneous combustion.

The design of the Wolf House called for 15,000 square feet of living space, it was to be a 4-story building constructed of volcanic rock, which came from a quarry in the Valley of the Moon; the roof was constructed of Mexican-style tile, which came from Oakland; the wooden beams on the outside and the trim on the inside came from Redwood trees which were cut and seasoned on Jack London's property. The house had 26 rooms and 9 fire places. The final cost was an estimated $75,000 in 1913 Dollars. Jack London purchased an insurance policy several weeks before the fire and collected an estimated $10,000. He vowed to rebuild the Wolf House, but had no financial means to do so. Instead, he built an annex to the cottage, where he worked for the next three years and where he died in 1916. 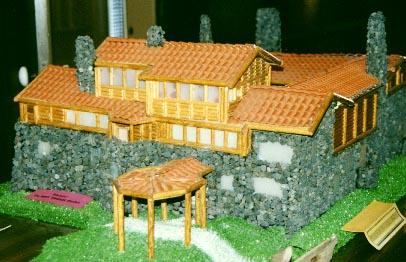 View of the front of the Wolf House ruin today, with large coastal redwoods surrounding the property. The ruin walls have been reinforced with steel bars on the inside; the tops of the walls have been capped with concrete to preserve the structure as long as possible.

View of the inner court of the building, featuring the reflecting pool. The pool was to be stocked with mountain bass and presumably, used as a swimming pool as well.